2017 IWLCA Players of the Year Named

The IWLCA named the 2017 Divisional Players of the Year on Saturday, June 3, at the All-American Banquet held at the Hunt Valley Inn in Hunt Valley, Md. The organization also honored the previously named Division I, II, and III All-American teams at the event, along with the Community Awareness Award winners from each Division. Carol Canetle, head coach at Gettysburg College, was the featured speaker at the banquet and University of Pennsylvania assistant Kerri Whitaker served as the Master of Ceremonies.

Division I: Megan Taylor, Maryland, Sophomore, Goalkeeper
Earning her first All-America honors, Megan Taylor backlined the Terps to a 23-0 record and the 2017 NCAA Championship. She ranks in the top three for save percentage nationally and repeated as the Big Ten Goaltender of the Year. Taylor was selected to the All-Big Ten and Big Ten Tournament teams and was a Tewaaraton nominee.

Division II: Olivia Kirk, LIU Post, Junior, Goalkeeper
Kirk, who repeated as the East Coast Conference Goalkeeper of the Year, compiled a league-best 16-3 record with a 6.42 goals-against average and a Division II-leading .543 save percentage. She never allowed more than 11 goals in a game and boasted a stellar 5.68 goals-against average in ECC play. Kirk was also the 2016 C. Markland Kelly Goalkeeper of the Year.

Division III: Sarah Honan, William Smith, Senior, Goalkeeper
The Liberty League Co-Defensive Player of the Year, Honan finished the year ranked third in the nation in with a 4.79 goals against average and fifth with a .571 save percentage. She set a program record with her 20 wins this spring. Honan finished her Heron career ranked third in career wins and career saves and fourth in career goals against average.

2017 IWLCA Defenders of the Year

Division I: Nadine Hadnagy, Maryland, Senior, Defense
A two-time All-American, Nadine Hadnagy led Maryland to a 23-0 record and the 2017 NCAA Championship, the Terps' third in her time as a Terp. Hadnagy led the Terrapin defense, which ranked in the top 20 all season, and was second on the team in caused turnovers. She was selected as the Big Ten Defensive Player of the Year and earned a spot on the All-Big Ten and Big Ten All-Tournament teams.

Division II: Ryley Weber, Adelphi, Senior, Defense
Ryley Weber picked up her third IWLCA First Team All-American honor this season after being tabbed IWLCA/NE10/ECAC Defensive Player of the Year. She was responsible for a team-leading 63 draw controls and also topped the team in ground balls (56). Weber also was named the Division II Defender of the Year in 2016.

Division III: Vanessa Budd, Franklin & Marshall, Senior, Defense
Just the fifth Franklin & Marshall women’s lacrosse player to be named a three-time All-American, Vanessa Budd wrapped up her four-year career second on the all-time caused turnovers list with 95 and fifth in draw controls with 136. She earned the Centennial Conference’s Defensive Player of the Year for the second time after registering a Conference-best 31 caused turnovers and leading the Diplomats with 29 ground balls.

2017 IWLCA Midfielders of the Year

Division I: Zoe Stukenberg, Maryland, Senior, Midfield
A three-time All-American, Zoe Stukenberg led Maryland to a 23-0 record and the 2017 NCAA Championship, her third as a Terp. She was a force across the field, ranking in the top three in each statistical category on the team. Stukenberg was named the Big Ten Midfielder of the Year and was selected to the All-Big Ten, Big Ten All-Tournament and NCAA All-Tournament teams. She is also the 2017 Tewaaraton Award Winner.

Division III: Hollis Perticone, Middlebury, Junior, Midfielder
Hollis Perticone, the 2017 NESCAC Player of the Year and an All-NESCAC selection, had a tremendous season for the Panthers. The first-team All-American and all-region midfielder had a conference leading 78 draw controls, including a career-high nine in the regular-season finale against Williams. She ranked third on the team in points (44), goals (33) and caused turnovers (20), while her 29 ground balls are fifth. Perticone eclipsed the 100 career point plateau during Middlebury’s NCAA Regional Final setback to TCNJ (71-31-102).

Division I: Kylie Ohlmiller, Stony Brook, Junior, Attack
Ohlmiller had a prolific offensive season in 2017, as the Seawolves junior was a Tewaaraton finalist after shattering multiple NCAA records. The Long Island native set Division I records with 164 points and 86 assists and was named America East Offensive Player of the Year for a Stony Brook team that had a program-record 20 wins in 2017 and appeared in the NCAA quarterfinals for the first time in program history.

Division II: Jacqueline Jahelka, Adelphi, Senior, Attack
Three-time IWLCA All-American who ended her career in the Brown and Gold by becoming the Panthers all-time scoring leader as a senior. She led the team and conference in goals (67) and helped the team to its fourth consecutive Northeast-10 Conference title and third NCAA National Championship in four seasons. Jahelka was the 2016 Division III IWLCA Attacker of the Year.

Division III: Clare Lyne, Trinity, Senior, Attack
Lyne, a senior captain and three-time All-American, is the second-leading scorer in the NESCAC with 73 points on 48 goals and 25 assists.  In addition to being Trinity's all-time leader in draw controls with 229, including a team-high 51 this season, Lyne joined the 200-point club with a goal and assist in the teams' NCAA Tournament Quarterfinals win against York.

A full gallery of photos from the 2017 IWLCA All-American Banquet are available for viewing and purchase HERE. 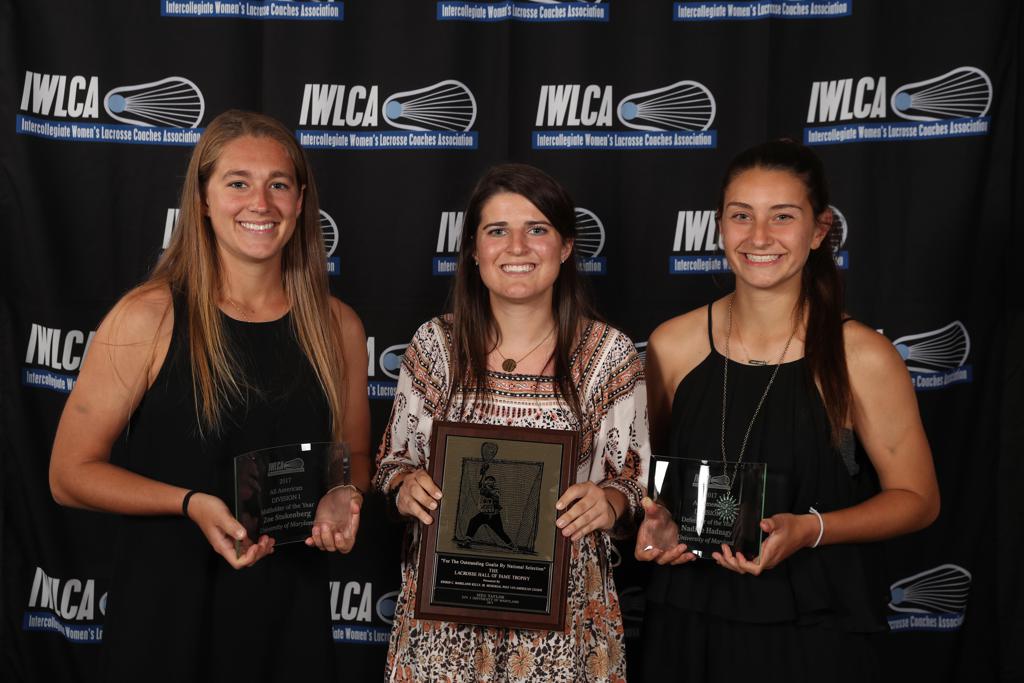 Division I Players of the Year:
Zoe Stukenberg, Meg Taylor, and Nadine Hadnagy 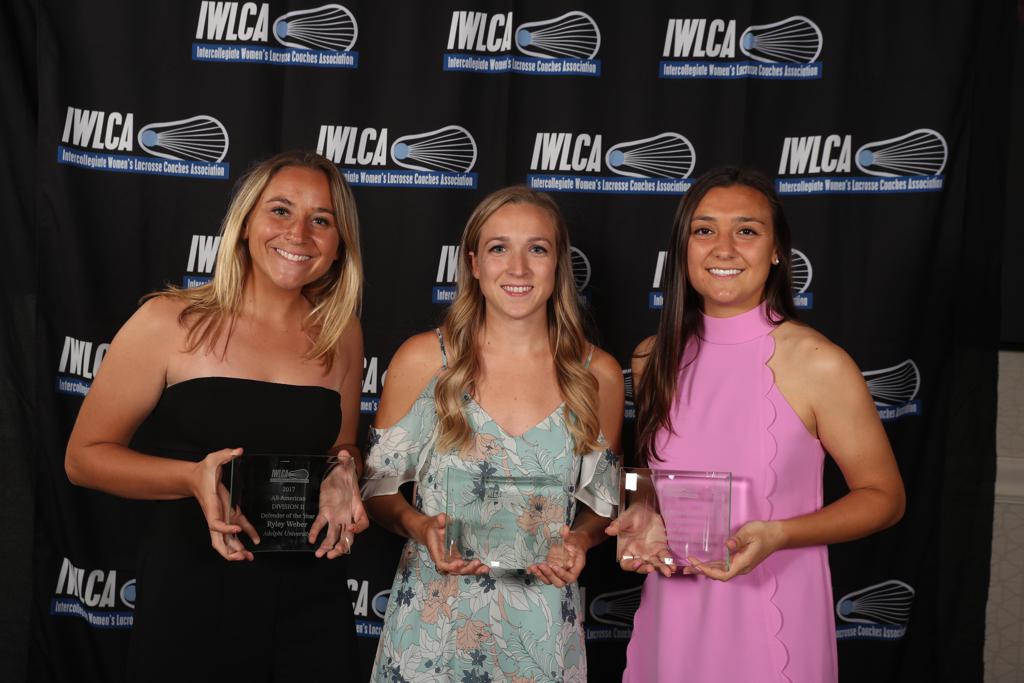 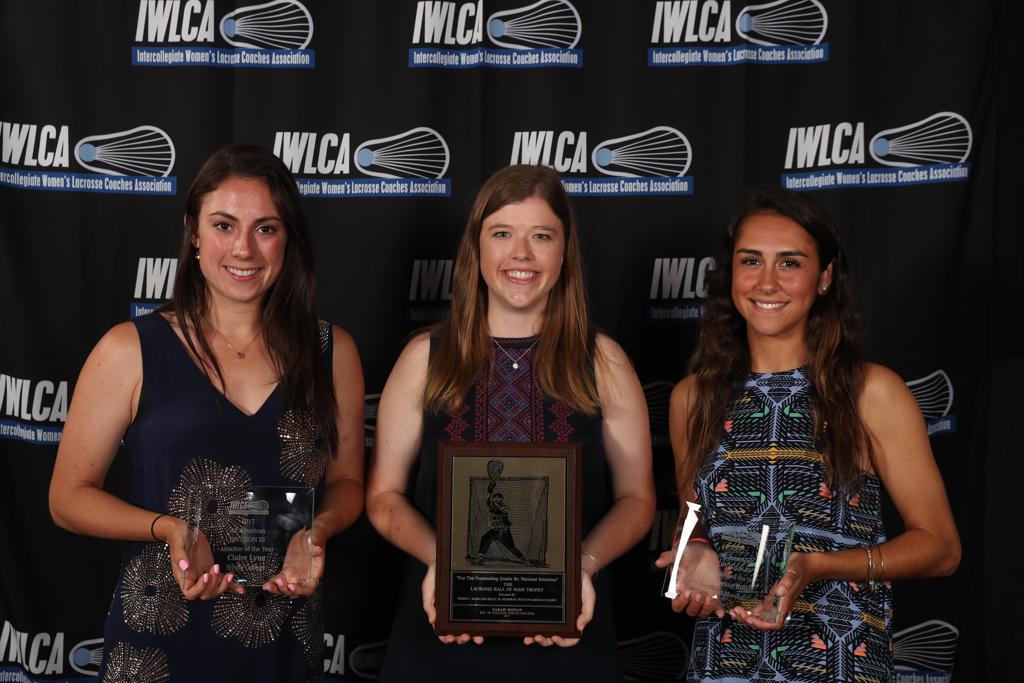 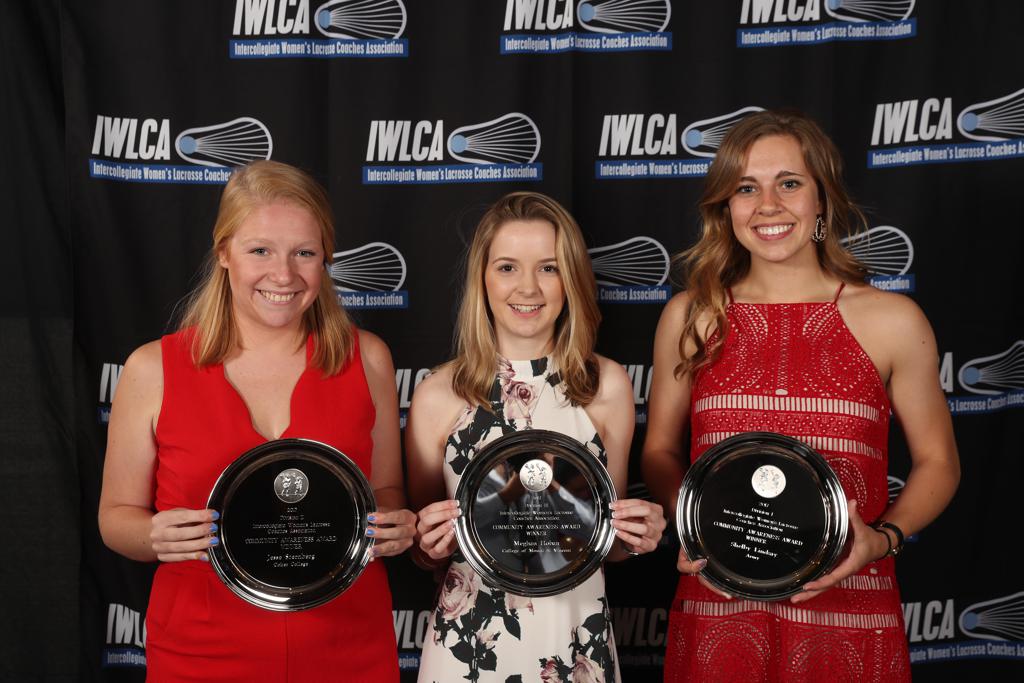