IWLCA Names 2016 Players of the Year

The IWLCA named the 2016 Divisional Players of the Year on Saturday, June 4, at the All-American Banquet held at the Radisson Hotel Valley Forge in King of Prussia, Pa. The previously named Division I, II, and III All-American teams were recognized at the event, along with the Community Awareness Award winners from each Division. Louisville head coach Kelly Young was the featured speaker at the banquet and Penn assistant Kerri Whitaker served as the Master of Ceremonies.

DeGarmo led the nation in save percentage nearly all of the 2016 season and was named the Ivy League Defender of the Year, first-team All-Ivy League, and a Tewaaraton Top-25 Nominee. DeGarmo finished the season with a 53.6 save percentage, 171 saves, 32 ground balls, five caused turnovers and an 11-6 record.

Olivia Kirk was the mainstay between the pipes for LIU Post in 2016. She compiled a 17-4 record, to go along with a 4.50 goals-against average and a .580 save percentage. Her .580 save clip was tops in the country, while her 4.5 GAA ranked second-best amongst the nation’s goaltenders. Some of her most impressive stops came on the biggest stage, as she set game-highs for saves against Adelphi, Le Moyne and New Haven. Kirk’s efforts led to a nod as the East Coast Conference Goalkeeper of the Year and an IWLCA All-North Region first-team selection.

Jeffrey is a three-time All-American – the first in Bates' program history -- as well a two-time First Team All-America selection. Jeffrey leads Division III in save percentage (.581) and backed the top-ranked defense in the NESCAC, allowing just 6.17 goals per game. She was named the NESCAC Defensive Player of the Year and to the first-team All-NESCAC squad.

2016 IWLCA Defenders of the Year

A three-time All-American, Mercer led Mercer's eighth-ranked defense that allowed just 7.09 goals per game this season. A Tewaaraton and Honda Award finalist and the Big Ten Defensive Player of the Year, Mercer finished second on the team with 31 caused turnovers. She also posted 39 ground balls and 16 draw controls.

Weber, the Northeast-10 Defensive Player of The Year, was also a first-team All-Conference selection and an IWLCA All-Region honoree. She led the nation's stingiest defense, holding opponents to just 4.27 goals per game. Individually Weber caused a team-high 38 turnovers and grabbed 63 draw controls.

Morrison was named to the IWLCA All-American First Team as a defender for the second consecutive year. Morrison has been the backbone of a Lions' defense that leads the nation in goals against at 3.65 per game. She leads the team in caused turnovers (66) and ground balls (88) and has won 60 draw controls and tallied 12 goals. She is the 2016 NJAC Defensive Player of the Year for the second straight year and also earned First Team honors.

2016 IWLCA Midfielders of the Year

A four-time First Team All-American, Taylor Cummings was selected as the Big Ten Midfielder of the Year, a Tewaaraton finalist and a Honda Award finalist. Cummings led the Terps to their fourth-straight national championship game. She set the Maryland single-season records in draw controls (144) and caused turnovers (52). In the career record books, Cummings ranks third in goals (229), ninth in assists (94), second in points (323) and first in draw controls (509).

Fisher is the Northeast-10 Conference Midfielder of the Year and a First Team All-Conference honoree. She led the Chargers with 43 goals and 62 draw controls this season. On April 23 she became just the 13th player in program history to eclipse the 100 career goal mark with her fourth tally of the game on Senior Day.

Santoli was tied for third on the team in goals with 35, second in points with 67 and led the team and led the Sunshine State Conference in draw controls with 64. She was named a First-Team All-SSC and First-Team All-South Region selection and helped lead the Mocs to a 19-3 record and its first-ever national championship in 2016.

Division III: Tara Monaghan, Cortland, Senior, Midfield
The SUNYAC Player of the Year, Tara Monaghan tied the Cortland single-season record with 80 goals as a senior. She added 14 assists for 94 points, led the team with 52 ground balls, tied for the team lead with 28 caused turnovers and was second with 86 draw controls. She finished her career seventh in scoring with 278 points on 236 goals, third-most in school history, and 42 assists.

Kayla Treanor is just the fifth Syracuse student-athlete to earn first-team All-America honors all four years of her career. She ranks fourth on the NCAA Division I all-time scoring list with 393 points and her 260 goals are the sixth-highest in Division I history. Treanor earned her third straight ACC Offensive Player of the Year award and set the Division I single-season record with 217 draw controls in 2016.

Jahelka is the Northeast-10 Conference Player of The Year and was voted a first-team all-conference performer. She was also a first-team CoSIDA Academic All-District honoree and led Adelphi in goals and points this past season with 80 tallies and 104 points.

Division III: Paige Moriarty, Franklin & Marshall, Sophomore, Attack
Paige Moriarty is the 2016 Centennial Attacker of the Year and a first team all-conference performer. Moriarty led her team and the conference in goals and points with 78 and 108 respectively. As a sophomore, she broke the school record for both points and goals in a single season. Paige helped lead the team to their second consecutive final four. 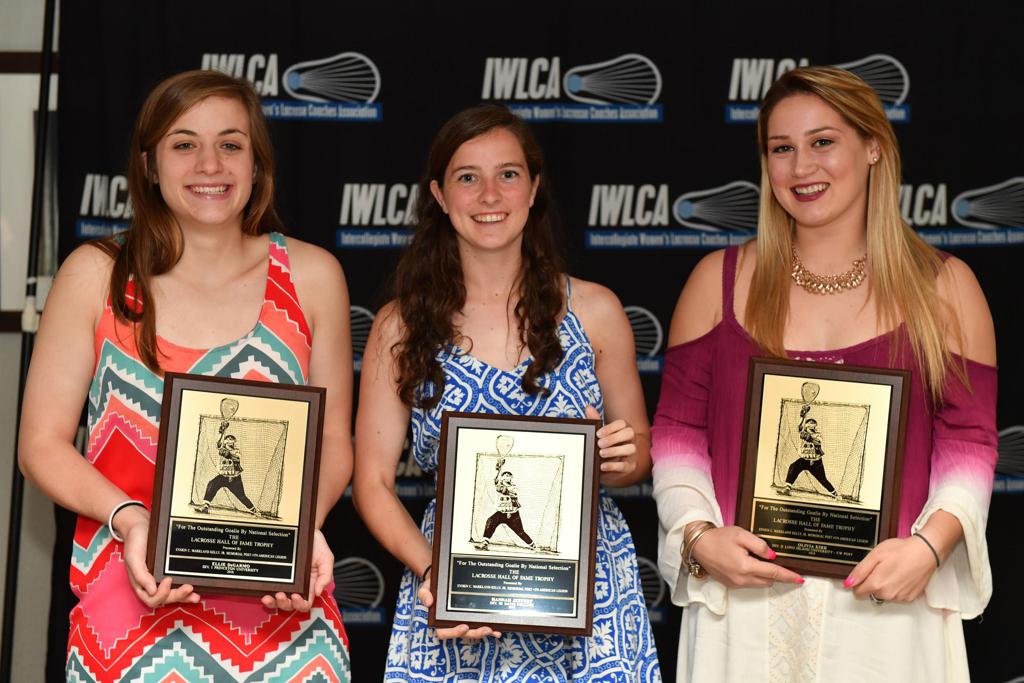 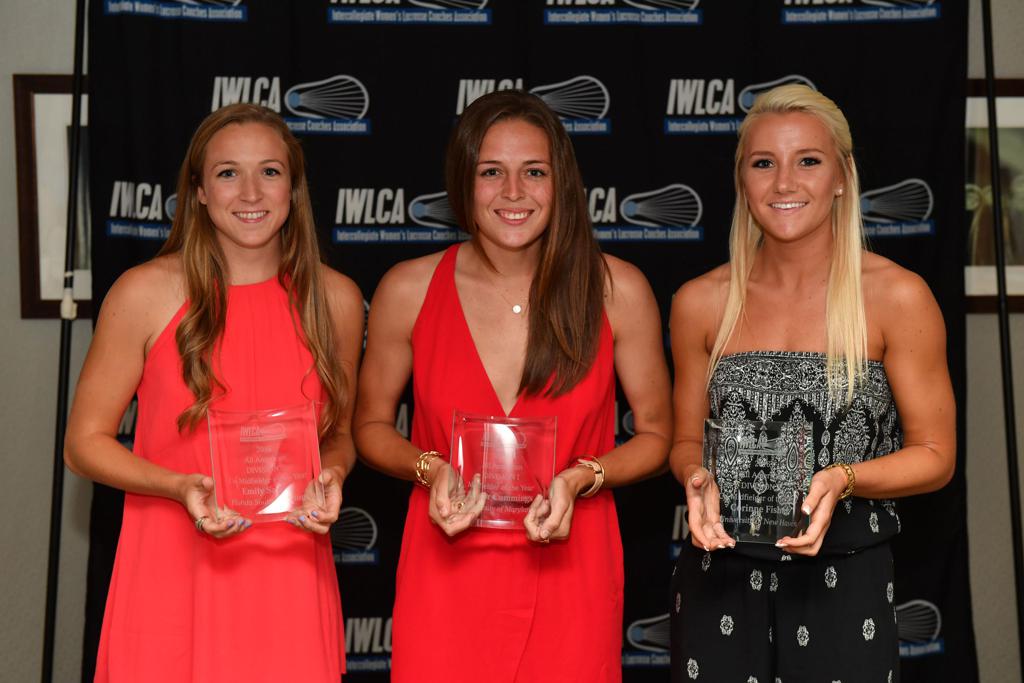 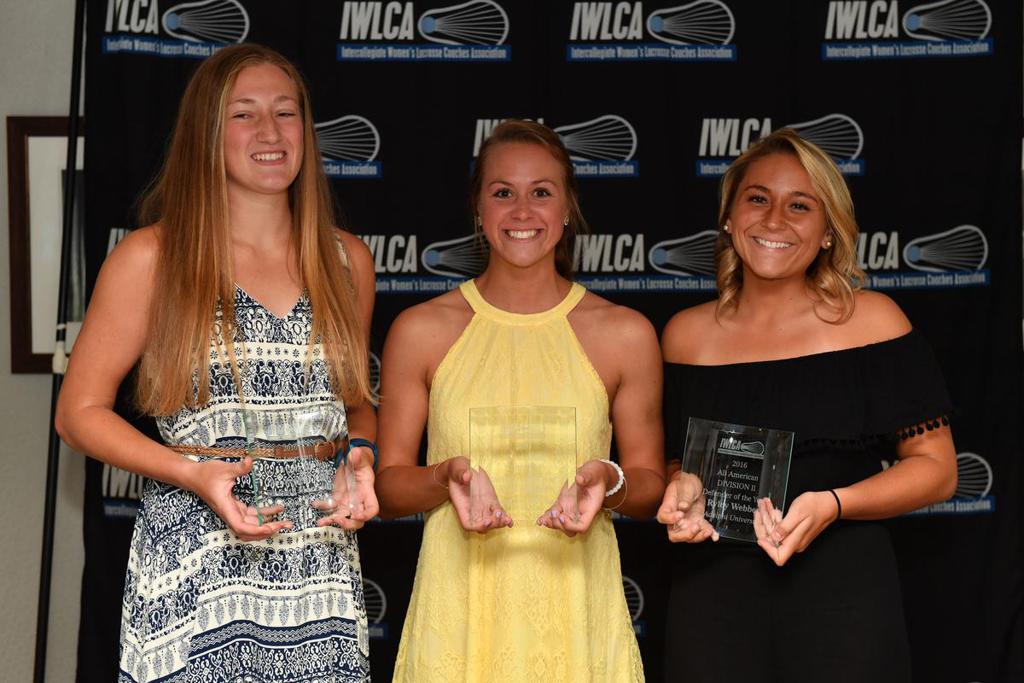 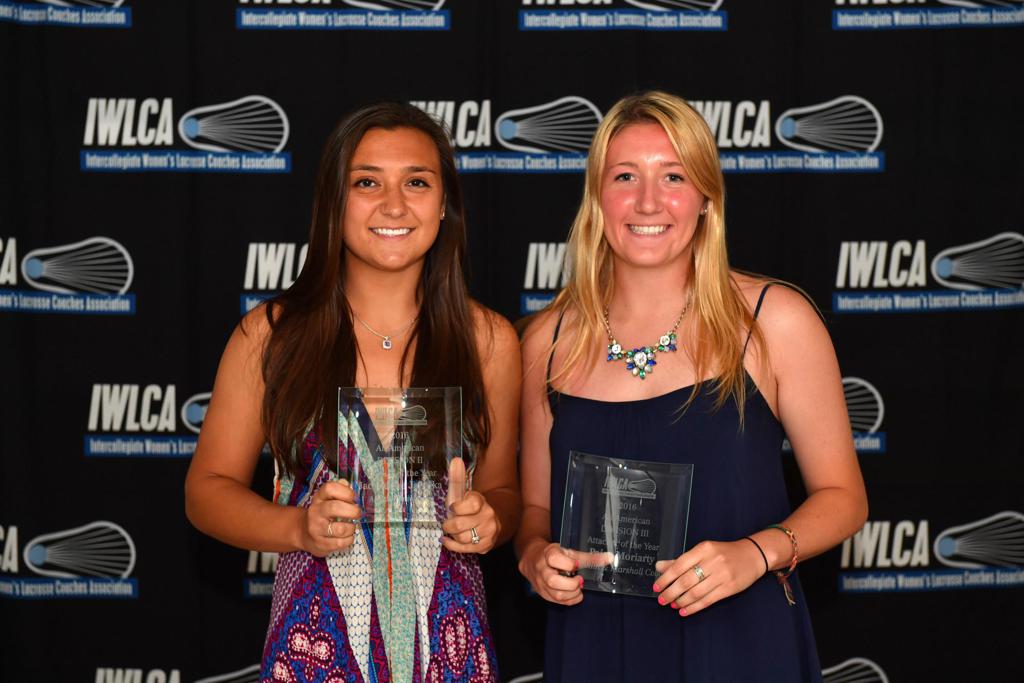 View the full photo gallery from the 2016 IWLCA All-American Banquet.