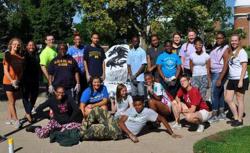 Albion is one of only 75 U.S. communities in 2015 to receive the competitive grant to fund The Big Read, a National Endowment for the Arts program in partnership with Arts Midwest that is aimed at encouraging reading and community dialogue.

What made Albion’s proposal unique, however, was the committee’s decision to have local middle and high school students lead book discussions in October.

The fantasy novel A Wizard of Earthsea by Ursula K. Le Guin was chosen locally by The Big Read committee. Given that Albion’s population is roughly one-third African-American (with 63 percent of Albion Public Schools students identifying as nonwhite), the book was chosen in part for its hero, Ged, who is described as having “red-brown” skin and so is a person of color.A pair of Briton student-athletes – women’s lacrosse goalkeeper Victoria Della Pia and track sprinter and jumper Rhiki Swinton – played an important role in preparations for the event as they participated in summer workshops geared toward equipping the middle and high school students with the skills they would need to engage the community in discussion.

Swinton and Della Pia have their own opinions about what the Big Read initiative will do for the community.

“The Big Read helps bring the community together,” said Della Pia, who finished last spring as the Michigan Intercollegiate Athletic Association’s Defensive Most Valuable Player. “It was a way for Albion to come together around one common book. The Big Read is similar to the Common Reading Experience that Albion College has for its first-year students.”

Jess Roberts, Albion College English professor and director of Albion’s Big Read committee, organized the summer activities and asked Swinton and Della Pia—along with other Albion College students, faculty and staff—to assist the youngsters in honing the skills they need to lead discussions while also exposing them to a college campus.

“The middle and high school students toured our facilities, talked to folks in admission and financial aid, met with faculty and current students, and experienced in some small way what it feels like to be in college,” Roberts said. “Though I would certainly hope that the experience will lead some of them to consider Albion in the future, I hope more than anything to help make college a viable possibility for all of them. Doing so requires not only cultivating their academic and social skills and confidence, but also helping them see themselves in a place like this.”

As a member of one of the final graduating classes from Albion High School, Swinton had a unique perspective on the impact The Big Read will make on the community.

“People think in Albion either you have to make it out of here or we are going to fail,” Swinton said. “It’s always been important to me to try and change the perception that people on the outside have about Albion. If a volunteering opportunity in the community presents itself, I feel like I don’t have a choice but to help.”

Della Pia, who came to Albion from Ajax, Ontario, is pursuing an education concentration with the goal of teaching. Her participation in the project is yet another example of how the College creates opportunities for students to gain professional experience before they graduate.

“Nearly all of the teaching placements I have done have been at Albion community schools, so I have gotten to know a good portion of the kids in the system and I really enjoy working with them,” Della Pia said. “I wanted the opportunity to get to know some of the older kids I had never taught. I have always wanted to get more involved in the Albion community, so this was a good way to accomplish that.”

If the summer meetings and workshops provide an indication, The Big Read events will be a success.

“We really enjoyed helping out. I think the Albion College students had more fun than the kids we were teaching,” Swinton said with a big smile on her face.

As a side note, former Briton swimmer Tess Haadsma, ’15, was a student in Roberts’ Practical Persuasion class aimed at teaching students how to plan and execute major writing projects, such as large grant applications. Haadsma’s class was devoted to composing a grant application for The Big Read.

Some of the information included in this story was provided by the Albion College marketing & communications office.