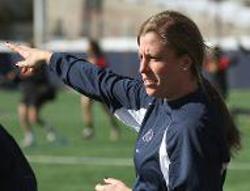 The IWLCA announced the three Divisional honorees for the 2015 Assistant Coach of the Year Award. Penn State’s Amy Altig, LeMoyne’s Jessica Antelmi, and Plymouth State’s Kristen Guest have been selected as the Division I, II, and III recipients of the award and will be recognized at the IWLCA Honors Banquet on November 19 at Disney’s Coronado Springs Resort. The Assistant Coach of the Year award recognizes an assistant coach from each Division who has made a distinct impact on the success of their program through hard work, commitment, dedication, and sportsmanship.

[Penn State's Amy Altig] Altig has been an assistant at Penn State for the last five years, directing the team’s recruiting and scouting operations while coaching the team’s goalkeepers and defense. According to head coach Missy Doherty, Altig “has done an amazing job coaching, recruiting, and helping take our program to the next level. She provides great balance for our staff and is a tireless worker.” In 2015, Altig coached goalkeeper Emi Smith to All-American recognition and helped lead the Nittany Lions to a Big Ten Tournament Championship and an NCAA Elite Eight appearance. In addition to her responsibilities at Penn State, Altig chairs the IWLCA Online Video Exchange Committee. 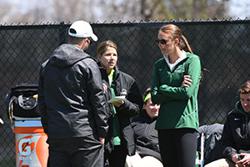 LeMoyne’s Antelmi has primary responsibility for the Dolphins’ offense, and in 2015 coached the  IWLCA Division II Attacker of the Year, Erica Geremia, who was one of the team’s five All-American selections. Antelmi helped lead the team to the NCAA Semifinals and according to head coach Kathy Taylor, LeMoyne is “just plain better for having her with us. She is hard working, intelligent, organized and efficient. Her loyalty is undeniable and she is all in on whatever task she takes on.” 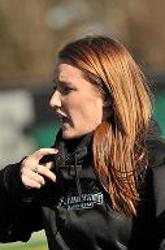 Kristen Guest has been Plymouth State’s Defensive Coordinator for the past three seasons. In 2015 she guided senior Rachel Fistori to the Little East Conference Defensive Player of the Year Award and to a IWLCA All-Region selection. “Kristen has selflessly given a large amount of time, hard work and dedication to our players and program and I feel we would not be where we are today without her on staff," said head coach Kristin Tracy. Guest has served as the interim head coach twice during the past three seasons while Tracy was on maternity leave.

All three honorees will be recognized at the IWLCA Honors Banquet held at Disney's Coronado Springs Resort on November 19 in conjunction with the Association's Annual Meetings.