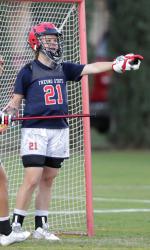 FRESNO, Calif. – As the sun rises on a chilly morning at Fresno State, she pauses, draws in a deep breath, closes her eyes, and exhales. When she opens them, her teammates are passing her by as they head to practice, beginning their stretches and preparing their sticks. It’s just another training day for the women’s lacrosse team as the season approaches. It’s just another normal day, and that’s all she’s wanted.

When redshirt junior Meganne Weissenfels puts on her goalie mask and begins her warm ups, she thinks about how lucky and blessed she is to have this normalcy return, and how much has changed since the accident.

In May 2014, Weissenfels was in a major car accident while back home in the San Diego area after finishing up her second year at Fresno State. She had suffered a traumatic brain injury that would place her in a medically-induced coma for nine days. Doctors gave her a 10 percent chance of waking up.

“When I finally woke up, I used sign language because I couldn’t talk,” Weissenfels added. “I was in therapy for a few months, and there were doubts of whether I should come back to Fresno State. But I wasn’t going to let it stop me. That’s not who I am.”

Weissenfels would begin six weeks of cognitive, occupational and physical therapy. She then began running and exercising to get back in shape for lacrosse.

During the fall semester of 2014, Weissenfels came back to school as a part-time student and attended lacrosse practices as an observer, as she wasn’t allowed to pick up a stick until October and couldn’t begin to practice until November. She would eventually play again during the spring 2015 season.

“We were surprised that she was able to come back so early,” Fresno State head coach Jessica Giglio said. “We knew it would take her some time, but we also knew she had what it took.”

Weissenfels appeared in 12 games and started eight. But it wasn’t the same.

“All I wanted was for things to be normal again,” Weissenfels said. “I was determined that my brain injury wasn’t going to set me back. But I was a different person. I was irritable, mean and mad at God. I believe that God does things for a reason and I was frustrated that I didn’t know that reason.”

Simpler Days
As a senior at Coronado High School, Weissenfels was touted as the No. 10 girl’s lacrosse goalie in the country by ESPN in October 2011, the only west coast player on that top 10 list.

“Meganne is a really athletic goalie,” Giglio said. “She was very tenacious in the cage and that’s the kind of goalie that I like to coach. Recruiting her was an easy decision.”

Weissenfels always knew she wanted to play sports. Her father, Bob, played football and competed in track and field for the Naval Academy and rode the bobsled for the United States in the 1992 Olympics. Her mother was a softball and basketball player, and her three younger brothers played a variety of sports as children. It was in her blood.

She began playing lacrosse in fifth grade in Washington, D.C., thanks to encouragement from some friends. Her family moved out west when she was in sixth grade. Weissenfels also played basketball, but she knew that lacrosse was her passion and the goalie position was where she belonged.

“I have a high pain tolerance, so it just made sense to be a goalie,” Weissenfels said. “And it’s just as important to be mentally tough as it is physical. I knew I could do it.”

She played on the same high school team as Fresno State junior midfielder Caroline Dineen-Carlson, and against other current teammates such as her roommate Chelsea Hall, a junior attacker from Poway, Calif.

“I remember when Meganne blocked one of my shots in high school,” Hall said. “I knew she was going to be great wherever she went to college. She takes hard hits really well and she’s very mentally tough.”

Weissenfels was interested in following in her father’s footsteps at the Naval Academy, but after an official visit with Giglio at Fresno State, she knew this was where she belonged.

“I remember going to the homecoming football game and getting to go onto the field at Bulldog Stadium,” Weissenfels said. “I loved the atmosphere so much that my decision was made instantly.”

The Return to Normalcy
Since the end of last season, Weissenfels says she has realized that sometimes things just happen, and we don’t always need to know the reason.

“Now that things are getting back to normal, I’m able to focus on myself and how I treat others,” Weissenfels said. “Lacrosse has helped parts of my brain work again. I’m still the same person, but I can be a better person. This year is going to be important. I can expand, grow, be a better goalie and be a better teammate.”

On the field, teammates and coaches are noticing the difference, and some, like Hall, are not surprised.

“I think about the kind of person that Meganne is, and she’s not the type of person to back down when things get hard,” Hall said. “Since the accident, Meganne has become even more assertive on the field. She has a greater presence on defense and she’s more involved and communicates better.”

“Meganne is one of the reasons we’re growing as a program,” Giglio added. “She’s ready to lead and help out in any way she can.”

Though Weissenfels has one more year of eligibility after this season, the biology major will graduate in May and move to the state of Washington, where her family now resides, to become a physician’s assistant.

But she’s not done at Fresno State yet. She wants this last season to be special and plans to work the hardest she ever has. She wants to finish off her Bulldog career the same way she started – passionate and tough.

“. . . To be great at whatever I choose to do,” Weissenfels said. “I want to keep a positive outlook on life with a smile on my face. I want to be a great Christian, a great friend, and eventually a great mother. I want to help people. I’m lucky to be here and I’m going to take advantage of it.”