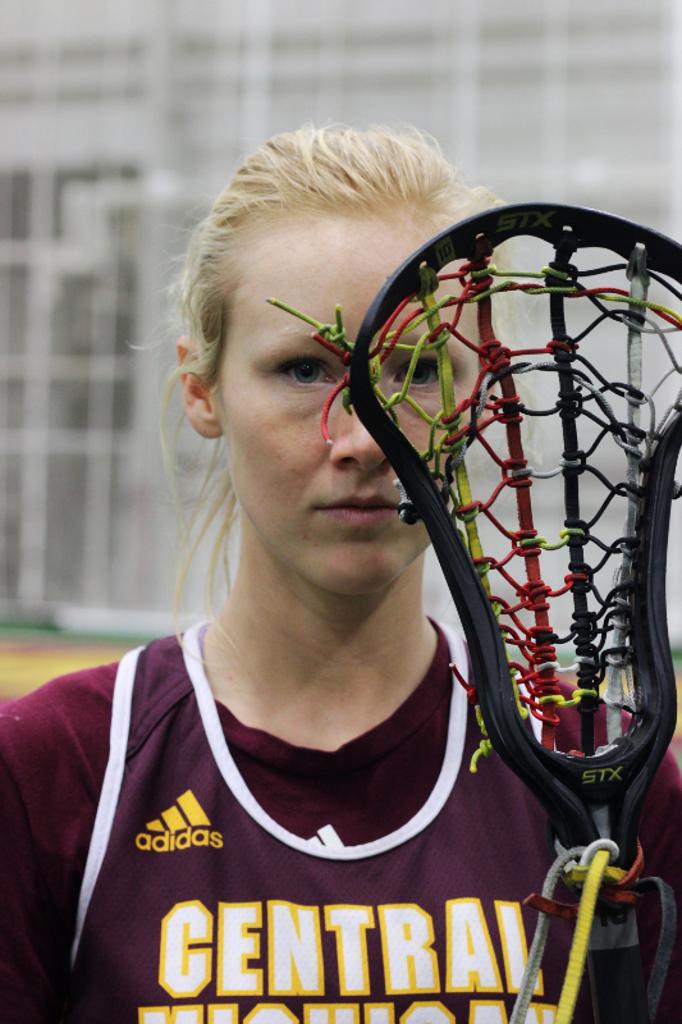 Chippewas: A name honoring the tribe whose land this university rests on.

A name carried onto many sports courts and fields, across the chests of hundreds of Central Michigan student-athletes. As of Sunday, the connection between the mascot name and Saginaw Chippewa Tribe has deeper meaning.

When the CMU lacrosse team played its first game in program history Sunday, the players not only ushered in a new sport for CMU athletics, but also carried the colors of the Chippewa tribe onto the field.

Lacrosse is the fastest-growing women's sport in the United States, according to the NCAA, but it isn’t a new sport in North America.

Lacrosse was originally created and played by Native American groups, including the Ojibwe — or Chippewa — tribe and others mainly in the Ontario region along the St. Lawrence River, the Great Lakes region and up into New England.

“It’s inspiring we have (a growing sport of lacrosse) happening in Michigan,” said Saginaw Chippewa Tribe Training Manager Jason George. “The name (Michigan) really means turtle. That’s an Ojibwe word and this is an Ojibwe game. The meaning is coming back to connect us as a family. We’ve never abandoned this place. We are still here.”

To incorporate lacrosse’s roots in the Chippewa tribe, CMU players’ pockets at the end of their sticks have the colors of the tribe — red, yellow, black and white — woven into them. The goalie’s helmets also have the colors stripped on them. The team’s pockets are strung to replicate the medicine wheel.

Mary Lewnadowski | Central Michigan Life
Head Lacrosse Coach Sara Tisdale said the Ojibwe medicine wheel is a traditional Ojibwe tool for representing the connections within the circle of life and how an individual grows. Each color on the wheel represents a cardinal direction that Ojibwe people revere, George said.

There are many interpretations and teachings based off the medicine wheel.

“There’s tremendous opportunity to celebrate that (history) and to inform and educate people,” Heeke said. "That’s something we can accentuate and another area we can educate the people around this community and elsewhere about the sport of lacrosse, its roots, how rich (the tradition) is and how it’s all coming together now right here in Mount Pleasant.”

George said the lacrosse team’s commemoration of the tribe’s roots is commendable.

“We’re still in the process of rediscovering (the game), finding our roots and making a connection to it,” George said. “Those sports that are American — whether it’s football, baseball or basketball — those are all fine and dandy, but there’s something special about lacrosse that connects us to our past and our history.”

“CMU has reached out to us to help us and encourage us,” George said. “It makes not just myself, but many others in the community who play the sport respect that.”

George said the tribe hopes to start a program of its own. The Iroquois have a team, the Iroquois Nationals, which competes against international opponents.

Tisdale said the tribe will bless the field at the CMU Soccer/Lacrosse Complex on April 15 with a drum and snow birds ceremony. The team will be presented ceremonial traditional lacrosse sticks decorated by members of the tribe.

Team members toured the Ziibiwing Center early in the offseason where they were taught about the medicine wheel. Tisdale said it was “a great opportunity to have that connection.”

Tisdale said the connection creates an aspect to the lacrosse program unlike any other sport.

“Nobody else on campus, no other sport has that direct tie like we do, and we take that pretty seriously,” she said. “From a recruiting perspective, it’s very unique. It’s a relationship that people really remember a lot about.”

Freshman defender Kelly Spehar said learning about the sport has not only showed her lacrosse's connection to the tribe, but that the rules of women’s lacrosse is closer to the original game than the men’s.

“The coolest part for me is that other schools have their mascots, but we have something deeper,” Spehar said. “We have the Chippewa tribe name. You definitely feel a stronger connection because you’re representing them and everything that they did in their history and (what they) believed in.”