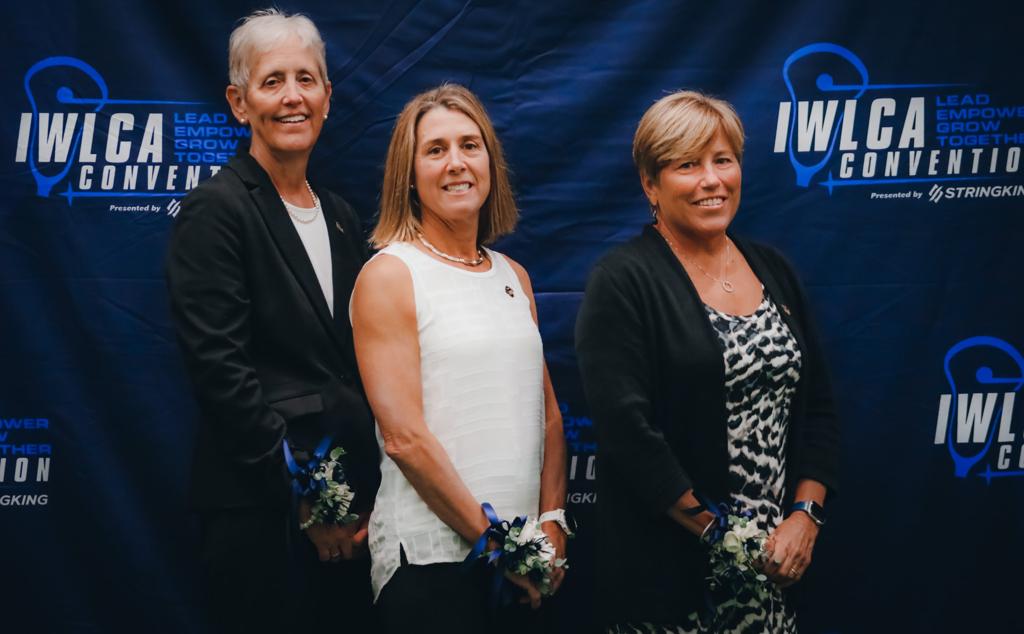 Photo by Tiffany Taylor, courtesy of the IWLCA.

The Intercollegiate Women’s Lacrosse Coaches Association (IWLCA) announced its 2021-22 award winners at the Hilton Anatole in Dallas, TX during the 2022 IWLCA Convention presented by StringKing. The Community Awareness, Victory Club, Regional Coaches of the Year, Outstanding Assistant Coaches, and the Kristina Quigley Scholarship awards were presented during an awards ceremony on Wednesday, November 16. The World Games participants were also recognized ahead of Wednesday’s presentation of awards. The IWLCA recognized the National Coaches of the Year, Service Award, President’s Cup, the Tina Sloan Green Award, and the Diane Geppi Aikens Memorial Award at the 2022 IWLCA Hall of Fame and Honors Banquet Dinner held on Thursday, November 17.

"It is always such a thrill to see our member coaches celebrate and applaud one another on their accomplishments," said Liz Grote, IWLCA President, and head coach at Bowdoin College. "It is important that we continue to have a platform that will allow our member coaches to be celebrated amongst their peers while also learning ways to grow the game in the process. These moments are unique to our membership and it’s imperative that we continue to uplift our members and show support.”

Wednesday’s event led off with a recognition of the World Games participants followed by the presentation of the 2021-22 Community Service Award. The USA National team and the Canadian Women’s National team were both recognized for their gold medal wins at the 2022 World Games this past summer.

The 2022 IWLCA Regional and National Coaches of the Year for all three divisions were then presented their awards, followed by the Outstanding Assistant Coaches (previously announced on November 7, 2022) receiving their awards. Phil Barnes (University of North Carolina), Rachel Ward (East Stroudsburg University), and Amy Patton (Middlebury College) were presented with their awards in front of their peers.

To cap off the first night of awards, the Kristina Quigley Scholarship Recipient Karen Heggerness was joined by her wife and adopted son, Layne, on stage to share her gratitude to the membership for the opportunity. Heggerness stated, “Thank you so much for this amazing scholarship! My family is very excited about the opportunity for a much-needed vacation while also showing my wife the coolness that is the IWLCA community.”

Whitaker was presented the IWLCA Service Award and celebrated for her efforts as the Chair of the Academic Selections Committee for the past seven years. Whitaker has spent countless hours ensuring that the student-athletes competing at IWLCA member institutions are recognized for their academic achievements and has also served on the association’s NCAA Division I Legislation Committee.

The President’s Cup Award is presented to a member of the lacrosse community who has exhibited distinguished contributions to the collegiate women’s lacrosse scene during the previous academic year. Scerbo earned this distinction after making historical strides in the publicity of women’s lacrosse this past year. Scerbo has served as the NCAA Division I Women’s Lacrosse Committee chair for the past three years. In his final year as chair, Scerbo worked relentlessly to convince NCAA and ESPN representatives that broadcasting the Division I women’s quarterfinals on ESPNU and moving the Championship to ESPN would be an important step forward in the growth of women’s lacrosse.

The Tina Sloan Green Award was created to recognize those individuals or teams that have actively worked to promote equity and inclusion in the lacrosse community in a given academic year. Receiving this award this year was Sydney Anderson, currently a junior at Delaware State University. Anderson’s documentation of the DSU Hornet’s police encounter this past summer in her article “Delaware State Women’s Lacrosse Team Felt Racially Profiled by Police in Georgia,” quickly received national attention. Anderson interviewed with various media outlets such as The New York Times, CBS, NBC, and CNN, which in turn led to a rally of support throughout the women’s lacrosse community and beyond. Head Coach Pamela Jenkins presented Anderson with her award.

The IWLCA’s marquee honor, the Diane Geppi-Aikens Memorial Award, was presented to University of Virginia Head Coach Julie Myers by assistant coach at James Madison Colleen Shearer, and Amy Slade, head coach at University of Maryland Baltimore County. The award is named in honor of the legendary Loyola coach whose courageous battle with cancer inspired the nation and recognizes lifetime achievement in the women’s college game.

The IWLCA concluded with the induction of three coaches into the Hall of Fame. The class of 2022 included former coaches Dorothy “Dotty” Hall (St. Lawrence), Jan Hathorn (Washington and Lee), and Chris Sailer (Princeton).

“The career achievements amongst this class of inductees are impressive and inspiring. We are proud to have had the opportunity to witness their successes over the years,” said Liz Grote, IWLCA President.

Hathorn and Sailer accepted their honors in person, while Kristine Hall, daughter of Dorthy Hall accepted Hall’s award on her behalf. Hathorn stated in her acceptance speech, “Coaching is a matter of the heart. It is one of the hardest professions you can have but if you lead with your heart and be vulnerable, the experience can be fun and phenomenal.”

Sailer added, “I have so much love and respect for all of those that have been a part of my coaching staff and players. So many coaches have inspired and challenged me over the years. I appreciate the great rivalry, but I am excited for what retirement will bring.”

The honorees were celebrated by several former players, coaching colleagues, and family members. Abi Jackson served as the master of ceremonies for the event.

The team and individual honorees were previously announced in July.

Division I Coach of the Year
Jenny Levy, University of North Carolina

Regional Coaches of the Year – Division I

Division II Coach of the Year

Division III Coach of the Year

NAIA Coach of the Year

Dorothy “Dotty” Hall was one of the most successful coaches in the history of St. Lawrence women’s athletics with a combined win total of 306 victories in field hockey and lacrosse, but her impact on the development of the women’s athletic program could be the most important part of her distinguished career as a teacher and coach. She was the first to win an NYSWCAA team title with her undefeated lacrosse team in 1990 and was the first Saint women’s coach to earn national coach of the year honors when she was named national lacrosse coach of the year in 1989. She also earned regional coach of the year honors in field hockey and is the first Saint women’s coach to take teams to the national semifinals in two different sports in the same academic year with the 1989 field hockey and 1990 lacrosse teams. She amassed a 172-121-1 record coaching lacrosse from 1978-1999. Hall also served as a mentor to other women’s coaches, and until her retirement in May 2000, was a popular and highly respected teacher. She earned the Maslow Teaching Award in 1995 and was a Danforth Teaching Fellow from 1980-86.

Jan Hathorn served as the women's lacrosse coach at Washington & Lee for 19 seasons before being named the Director of Athletics. She arrived at W&L in the fall of 1987, serving as women’s soccer coach from 1987-2000 and women’s lacrosse coach from 1989-2007. Hathorn earned nine ODAC Coach of the Year Awards and led the Generals to nine conference titles and eight NCAA tournament berths, amassing a career record of 277-112. She was a two-time regional coach of the year, and in 2010, she earned the Diane Geppi-Aikens Memorial Award for Lifetime Achievement. Hathorn also coached lacrosse for five years at Denison University.

Chris Sailer is in her 36th season at the helm of the Princeton women’s lacrosse program. She was inducted into the USA Lacrosse National Hall of Fame in 2008. She has guided Princeton to three NCAA championships, 11 national semifinal appearances, 26 NCAA tournament appearances, and 15 Ivy League titles. Sailer ranks second in NCAA history among Division I coaches in victories, with an astonishing 418 career wins, and is the second-winningest active coach in Division I and second all-time. She has coached more NCAA Tournament games than any other coach, a total of 60 games, and is second in NCAA wins with 37.