"While we are proud of the overall growth and support of softball nationally, inequity still exists and that must be addressed, not only within an NCAA championship experience, which impacts a relatively small number of programs, but also within the conferences and at the institutional level.” Said Carol Bruggeman, Executive Director, National Fastpitch Coaches Association. “Our women's teams should not have less support and fewer resources than men's teams, yet that has been typical and sadly, even expected and accepted -- until now. The photos from San Antonio pulled back the curtain and jump started an important dialogue about this issue of gender equity in sports. We look forward to sharing our perspective and experiences with the gender equity review group to achieve the goal of eliminating these differences in treatment based on gender."

"Gender equity has been a focus of women's coaches for years without the NCAA listening,” said Liz Robertshaw, Executive Director of the IWLCA. “It is time."

The coalition is seeking support from college presidents, athletics directors, senior woman administrators and the NCAA Board of Directors to authorize an independent review of gender equity across NCAA Championships, on their campuses and in their conference offices.

“2022 is the fiftieth anniversary of Title IX,” said Heather Lewis, interim Executive Director of the NFHCA. “It is time for recognition that girls and women will make different sport choices from men and those should be honored.” 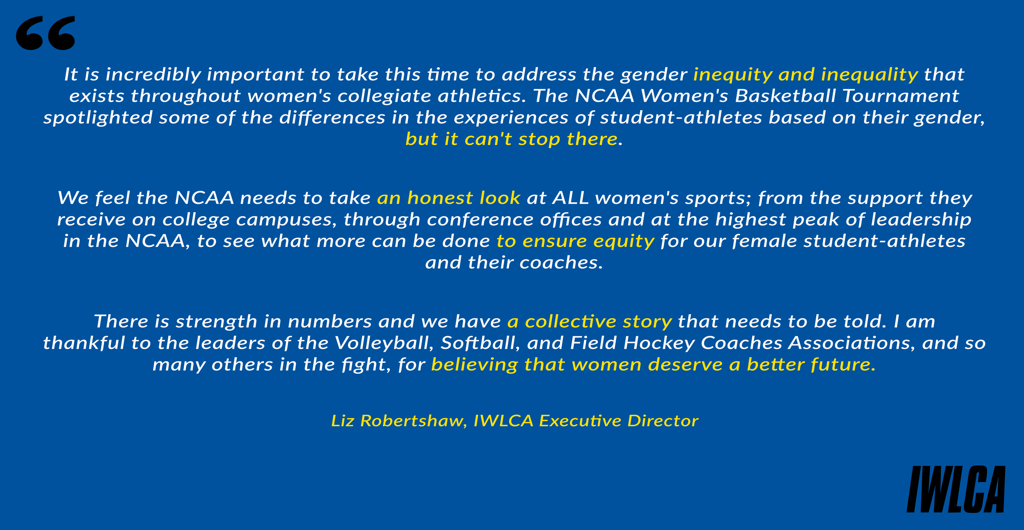