The IWLCA has chosen six NCAA student-athletes for the IWLCA/StringKing Player of the Week awards for the week of February 24 – March 1, 2020. This weekly award recognizes the best offensive and defensive performances by payers in Division I, II, and III each week during the regular season.

Hawryschuk led the Orange in their win against #9 Maryland. She scored twice and dished out an assist in the first half, helping Syracuse to a 4-0 halftime lead. After Maryland cut the lead to one at 5-4, Hawryschuk scored three of the Orange's final five goals in a 10-5 win. She also added two ground balls and a caused turnover and recorded her 200th career goal in the victory, which sw the Orange move up to #3 in the IWLCA Division I Coaches Poll.

Trenchard registered 11 draw controls in Saturday’s 18-12 win at  #7 Virginia, seven more than her previous career high of four, set on three occasions. Her 11 draw controls were the most by a Tar Heel since Marie McCool had 11 against Northwestern in the NCAA Tournament quarterfinals on May 19, 2018. Trenchard also recorded two ground balls and a caused turnover while holding Virginia’s Sammy Mueller to just one goal as the top-ranked Tar Heels opened ACC play.

McGuire notched seven goals and five assists in the Lions’ victories over #7 Tampa (11-5) and Tiffin (21-3) last week. The graduate student attacker also contributed four ground balls and five caused turnover in the two games and helped Lindenwood move up to the #3 ranking in the latest IWLCA Division II Coaches Poll. This is McGuire’s second IWLCA/StringKing Player of the Week honor in the 2020 season. 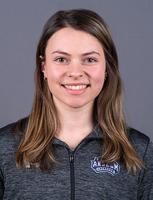 Young played a key role in a 13-3 upset win over #16 Saint Leo Sunday afternoon. She recorded a career-high 11 saves in her third career start for the Hawks, posting a .786 save percentage. The sophomore goalkeeper also picked up a team-high four ground balls and caused three turnovers in the game, helping land the Hawks at #25 in the IWLCA Division II Coaches Poll.

Angelucci scored a team-high six goals, including the game-tying, and game-winning goal in Trinity’s season-opening, 15-14 win at Williams. She tied the game at 14-14 with an unassisted goal with 3:29 remaining and scored the game-winner, unassisted, with 2:40 left. The junior midfielder also registered a game-high four ground balls, one draw control, and a caused turnover, helping the Bantams rise to #16 in the IWLCA Division III Coaches Poll.

Gilbert registered a .583 save percentage over two games last week to lead the #6 Generals to a 2-0 week. On Sunday, the senior totaled 11 saves on a .611 save percentage in a 10-7 victory at fourth-ranked Salisbury. She also had four ground balls and two caused turnovers in the contest. Against Rhodes, Gilbert logged 39 minutes, making three saves and collecting a ground ball as her team won 22-4.