The IWLCA has announced the 2019 Outstanding Assistant Coach awards for each Division. Jenn Cook (Princeton University), Kelly Hamilton (Queens University of Charlotte), and Ashley Fitzhugh (York College of PA) will be recognized at the IWLCA Annual Meeting on November 20 for their achievements. The Outstanding Assistant Coach award recognizes an assistant coach from each Division who has made a distinct impact on the success of their program through hard work, commitment, dedication, and sportsmanship. 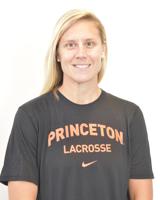 The Associate Head Coach at Princeton, Jenn Cook is entering her eighth year with the program and helped lead her team to the 2019 Ivy League regular-season and tournament championships, followed by a pair of NCAA tournament wins before falling to Boston College in the NCAA quarterfinals. The 16-4 Tigers strung together 11 straight wins, including five straight Ivy wins, three of which came against teams that reached the conference tournament, and all on the road. Princeton head coach Chris Sailer wrote about Cook’s impact in her nomination for the award: “Jenn takes full responsibility for the defensive end of the field for Princeton, implementing systems, coaching the schemes and the details of defensive play, preparing the defensive scouting reports, and making the key strategic calls on her end on game day. She has a steadfast belief in the players we have and in our team’s ability to get the job done. She knows what it takes to win and she makes sure our players are doing the little things that add up to greatness.”

Cook works primarily with the midfield and defensive units and coached the 2019 Ivy League Goalkeeper and Defensive Player of the Year. “I would like to thank the IWLCA for this huge honor, particularly given the number of fantastic coaches that work within the college lacrosse community,” Cook said. “My coaching career has been defined by the people around me, and their mentorship and guidance in my career has meant the world to me. Outside of my coaching family, I also want to recognize my actual family, and particularly my parents, whose unwavering support has no bounds and who still to this day come to all my games.”

Kelly Hamilton made an immediate impact on the program at Queens after she was hired in 2018. According to head coach Clare Short, “Kelly was hired to completely take over our attack. She led them to a number one ranking in assists in Division II. We also had our highest scoring percentage and had the most players score multiple goals in Queens history. Kelly helped mold our athletes to have a tight team chemistry that resulted in our success. She is very responsible, leads by example and has the upmost respect from our players.”

In addition to her work with the attacking unit, Hamilton also works closely with the draw specialists, goalkeeper and midfielders, and saw five players named to the All-conference team and three named as All-Americans. Queens finished 2019 with a 19-3 record and a trip to the NCAA Division II Semi-finals after capturing the South Region Championship with an overtime victory over Rollins College. “I am extremely honored and humbled to receive this award from the IWLCA. My first year at Queens was an unforgettable one, thanks to the student-athletes who bought into the vision and worked tirelessly every day to make their goals a reality,” Hamilton said. “I'd like to give a huge thank you to Clare Short who brought me into her program as a former teammate and friend and has grown into a true mentor. I am grateful for the opportunity she has given me to get back into coaching."

Ashley Fitzhugh completed her twelfth season with the Spartans in 2019 and helped the squad to a 17-6 record and an NCAA tournament run that saw them advance to the regional finals, where they fell to Tufts University. She works primarily with the defensive unit and mentored Nicole Clauter, a first-team All-American and the 2019 IWLCA Defensive Player of the Year. “I am very honored to be receiving the Division III Outstanding Assistant Coach award,” Fitzhugh said. “I would like to thank the IWLCA, York College, my current and former student athletes and Coach Muston, whom I have had the pleasure of assisting over the last 12 seasons.”

In 2019 York won its first-ever Capital Athletic Conference (CAC) Championship, defeating a team that has won this tournament for the past 16 years straight. They compiled the most wins in program history (17), advanced to an eighth straight NCAA tournament and made their fourth Elite-8 appearance in the last five seasons. Jen Muston, the head coach at York, wrote in her nomination, “The impact Ashley has had on our program not only last season, but in all her years of work with us is incredibly invaluable and vital to the sustainability of our program. Over the years her presence on our coaching staff has enabled the program to grow tremendously and build to the point of being a top team in Division III year after year – which speaks to the impact she has had on our program.”

The 2019 IWLCA Annual Meetings will be held November 20-22 at the Palm Beach County Convention Center in West Palm Beach, Florida.